Gnomenreigen (Dance of the Gnomes) was published in 1863 as part of the Klavierschule, a collection of technical studies compiled by Siegmund Lebert and Ludwig Stark, professors at the Stuttgart conservatory. Liszt dedicated this etude to his former student Dionys Pruckner. It is a brilliant concert etude that showcases the performer’s technical and expressive abilities.

Bar 1: Stay close to the keys. Think of coming “up” from the keys, not “down”. Playing “up” makes it lighter.

Practice with accents on the main notes. It helps you get the right articulation at full speed.

Bar 4: Don’t slow down – there is no ritardando.

Bar 5: Think of them as almost being written together (chord-like). Breaking them too much will slow you down.

Bar 13: Bring out the difference between 32nd notes (demi-semi-quavers) and crushed notes (acciaccaturas)

Bar 20: Keep it strong until the very last note! 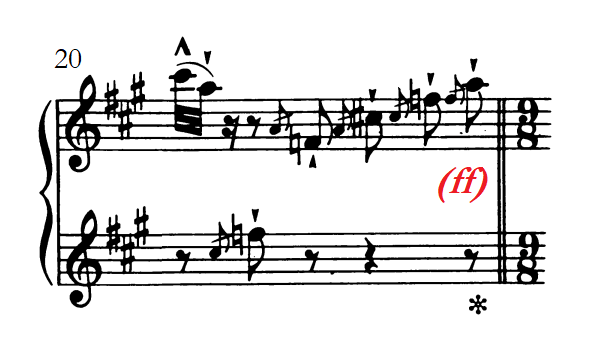 Bar 21: Right Hand: Use Arm weight for the melody, and fingers for the accompaniment. (arm, finger, finger, finger, arm, arm, arm…) Associate the amount of sound required with the part of the playing apparatus to be utilized.

Left Hand: Play the last chord with sharpness and energy. Apply the same to similar parts.

Bar 29: Start soft, and delay the crescendo until bar 31-32. It makes it more dramatic.

Bar 33: Play the left hand chord with power, and the right hand notes with brilliance.

Bars 110-114: Regroup this section. Think in overlapping phrases. It makes it more natural and musical. The left hand should move in a circular motion to avoid tension.

Bar 117-118: Release tension. Move the wrist with the phrase (down-up) and change pedal per beat. Prepare for the ascending chromatic chords.

Bar 133: Keep the left hand strong until the last chord!

Gnomenreigen is in F# minor. It is in a free formal structure, based on two themes. It resembles a classical rondo-sonata form.

Bars 33-40: Transition. Based on diminished 7th harmony, leading to the return of the introductory theme in F# minor.

Bars 69-76: Similar to before, but leading to a new rhythmic figure based on the first theme.

Bars 77-102: Transformation of the first theme, G minor. Dominant pedal in the bass from bar 84, with many augmented triads played above. Diminished 7ths are used from bar 93.